As early as the fourteenth century, in what was then known as the Republic of Lucca, the oil obtained from the olives grown to the north of the town, in an area called Matraia, was much sought after. The south-facing slopes of these hills became home to many ‘frantoi’ or oil mills. Animals like donkeys and horses were used to turn huge stone wheels that pressed the olives. The resultant pulp, known as ‘sansa’, was then left to decant in large stone basins full of water. The oil that appeared on the surface was collected with special pans called ‘oliarole’.

Since then the techniques used to extract oil from olives have been gradually perfected and we can now obtain a perfect product known as Extra Virgin Olive Oil.

Il Frantoio di Matraia (The Matraia Oil Mill) is located in the town of Marlia. What used to be an ancient oil press set in the hills of Matraia to the north-west of Lucca has been modernized. Matraia is home to hundreds of olive trees, offers optimum soil and has a long-standing reputation for the production of excellent extra virgin olive oil. Mr Perna, backed by his family, decided to take over the small, old mill and bring back to life the values and traditions that had been so jealously guarded in the olden days so that the new generations could rediscover and appreciate them. The re-modernization began and the mill was finally re-opened at the start of the 1998/99 oil season.

The combination of old and new techniques, on the one hand stone grinding and on the other the use of the modern gramola machine to extract oil from the olive paste, proved to be successful. Within a few years the company expanded, introduced more machinery and increased its production of extra virgin olive oil.

Given that the mill’s position was rather difficult to reach, Mr Perna decided to move his mill to an area in the plain of Lucca where both olive growers who needed to have their olives grinded and individual customers who wanted to buy excellent oil would have easier access.

When the mill was re-located, so too the production process saw further innovation. The latest technology available for the process of oil extraction was employed with the utmost care to guarantee that none of the organolectic properties or quality of the Lucca olive oil was in any way compromised. We have maintained all the unique taste and aroma for which Lucca oil is world famous. 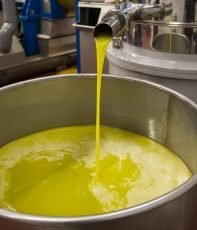